Government officials and partners from the ten countries - Afghanistan, Bangladesh, the Democratic Republic of Congo, Ethiopia, India, Indonesia, Nigeria, Pakistan, Sudan and Tanzania - are discussing on ways to accelerate achievement of MDG 5 until the end date of 31 December 2015. The meeting is taking place in the framework of the UN Secretary General's Global Strategy for Women's and Children's Health. 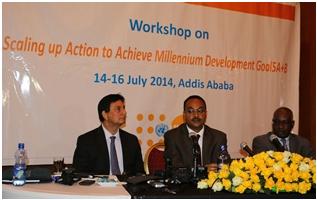 In the remarks he made during the occasion, Mr. Faustin Yao, UNFPA Country Representative, indicated that "ending preventable maternal mortality is critical for the health of women and families, essential to sustainable development, and is achievable."

Maternal mortality is rife in many parts of the world and 75 per cent of these deaths can be averted if women have access to comprehensive sexual and reproductive health and family planning services as well as interventions for preventing or treating obstetric complications that occur during pregnancy and childbirth. With about 550 days remaining to reach the MDGs target date, there is a need to review progress made, learn lessons and further scale-up actions.

Global maternal death has almost halved since 1990, from an estimated 523,000 women dying yearly to 289,000 in 2013, according to a report issued by the United Nations recently. Unfortunately, the advancements have been insufficient to achieve MDG5 globally and scaling-up action is vital to reach the targets by 2015.  Just the 10 countries participating in the workshop account for more than 60 per cent of all maternal deaths worldwide.

Meanwhile, a Roadmap to Accelerate Achievement of Maternal and New-born Survival aiming to save an additional 140,000 women's and 250,000 new-borns' lives and provide universal access to modern contraceptives was launched recently in Rwanda.